Each truffle season I wonder if it will surpass the previous truffle season and I am never disappointed. In the 2019 season Indi found five new producers:

The excitement of the new producers is priceless after all the hard work of liming, planting, adding irrigation, and annually pruning their various trees, whilst patiently playing the long waiting game for their first truffle to arrive.   I am thrilled to be a part of this process with my trusty dogs locating their first truffles.

When we arrive to survey trees, we never know what the day will bring.  For some this season they have been waiting a long time for their first truffles to appear, and their reaction can be from disbelief moving onto elation, and ultimately a celebration with wine or champagne (which I love being part of) and eating the truffle in a multitude of ways.

With the number of producers increasing in the North Island, we can only guesstimate

that we have located in excess of 30 kg of T. melanosporum truffles, and approximately 10 kg of T. borchii in the 2020 season.  The exact weight of truffles located is unknown and can only be estimated as many were marked to remain in the ground to be dug up at a later date.  On visiting one truffiere, and then returning a few weeks later, they mentioned that one of the truffles that had been marked and eventually extracted, when weighted was just under a Kg! Wow…unfortunately no photo available, but nice to know.

At the beginning of the season Laurie and Toff Mylchreest were interviewed for the Waitomo News and mentioned that Truffle Dog Services completed truffle searches for them. This led to us also being interviewed for the Waitomo News where we were front page of the North King Country Farmers insert.  A similar article was then run in the Cambridge times after being contacted by another reporter.

Later I was contacted by Stuff regarding truffle dogs role in the truffle industry which lead to a video and story on Stuff, with written articles in the Waikato News and the Dominion Paper – 15th July. 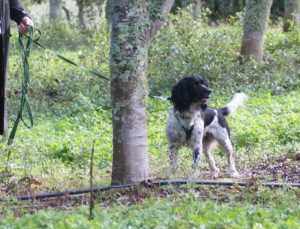 We completed our first night search this season with Tigga who is normally easily distracted by birds, and other creatures during the day. All harnessed up and working under torch and headlights we wandered to the truffiere for the search. Tigga was amazing. In the torch and headlights we could see some baby rabbits and other night creatures, but Tigga had her head down and was searching every tree, just like her mentor Indi. It was thrilling to watch her work so consistently as she had in training…our goal during the off season is to get her up and running during the day the same way she works in the dark, by ignoring distractions such as birds and rabbits.