Wow!  From the time we all arrived on the 12th Feb through to the time we left on the 17th Feb, Marcos and Xavier, were just the most amazing hosts.

On arrival at the Hotel Ciutadella in Barcelona, I met with the lovely Ivan and Radmilla from Croatia.  They are mother and son that run a truffle business and I had the pleasure of spending the afternoon with them wandering around the Mercado de La Boqueria. 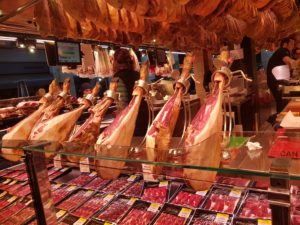 I remember these types of markets from camping in France (Marseillan Plage) and Spain (San Pedro Pescador) in the school holidays with my family as a child.

The Jamón serrano was just everywhere and was amazing tasting.  The prices varied depending on the age of the Serrano ham.  Some were several years old, and the reflected in the price per Kg.  It wasn’t all about the ham though, there was amazing 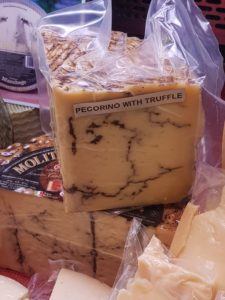 spices and cakes available here, as well as lots of different truffle products.  My favourite was the pecorino cheese with truffle.  Can still remember its taste now, it was divine.  There were other items as well and the brie and camembert with truffle, then there was the colourful salts that were coloured depending on the herb or spice they were representing.

The smell and bustle of the market was amazing. The different vendors all trying to get you to their stall to sell their product, and trying the same product at different vendors until you found the one you wanted to purchase was such a experience.

Back at the hotel we met with other members of the group and started introducing ourselves.  There were several Americans from different States; one from Mexico, Chile, and Holland; two from Canada and Croatia; one from Australia, and then myself.  It was a well rounded international group that had one common goal of learning more about truffles.

Marcos and Xavier arrived to usher us out to the awaiting bus and onto Vila de Caldes, Caldes de Mountbui.  We had a lovely hotel where we were going to stay a couple of nights, where we were in close proximity to the IRTA, Torre Marimon.

We spent the first morning at the IRTA learning more about truffle growing by way of soils, host trees, pruning, herbicides, and much more.  We were then taken up into the hills, after checking the weather forecast for a wild truffle hunt in some woods.  It had been -10 the previous week, and heaving snow was falling in the hills and they were unsure if we would be able to go or not.  All worked out well and we went to meet the truffle hunter and his dogs. 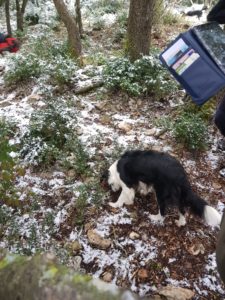 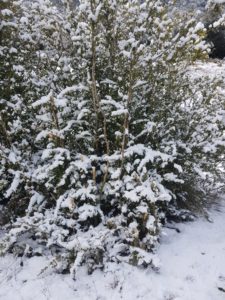 Fortunately we had taken our winter woolies with us, as although it was a fairly sunny day, the wind was quite cold and you needed to keep moving to stay warm.  The dogs moved beautifully through the snow, winding underneath the trees searching for the truffles hiding under the snow.  They found a few of them in the short time that we were there, but we moved on towards our lunch, after taking in the magnificent view just further down the road. 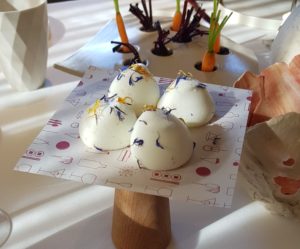 were treated to a 12 course truffle lunch. Words cannot describe what the meal was like, but each course provided us with different preparations each one showcasing the truffle in different ways. 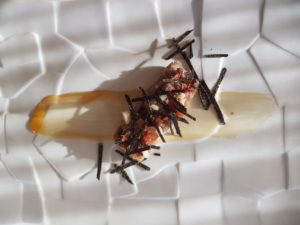 Meringues with Carrots dipped in a truffle sauce, foie gras with slices of truffle on top, fish with slices of truffle, and the dessert you had to dig into to find your own truffle, ice cream covered in chocolate.   It was an exquisite meal, with every two course finely matched with the right accompaniment of wine. 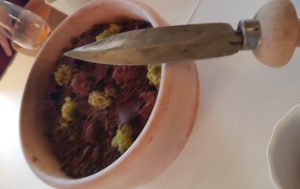 After the meal, they served tea and coffee, from the most amazing tea and herb trolley.  Their herb teas are made from fresh herbs from the trolley.  They selection was amazing, but you know, the hardest tea to find was a good black tea, such as English Breakfast. 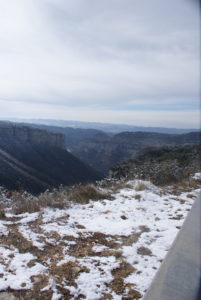 Once the meal was finished, we travelled up the road a little way to see the most stunning view of a valley tha tappeared to have been cut out by glacial movement thousands of years ago, and extended outwards towards very clear lake below.

Back on the bus we motored to our accommodation in Casa de Montbui.  For those that were game enough an evening stroll had been arranged to see around the Roman ruins, including the Roman baths, and 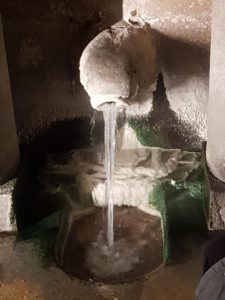 taps throughout the township where the water runs at 74 degrees C from underground.  As we walked along the high river wall, there were a number of different covered baths where clothes washing was completed a few hundred years ago.  The path then meanders around to take us back to the town square.  I finally found a place that had black tea, which I enjoyed immensely and finished the evening in a local pub with some groups.  Great evening was had by all.

Starting out from Vila de Caldes we returned to the IRTA, Caldes de Montbui to listen to some more great speakers about truffles, including meeting Esterban who I met at the NZTA’s Rotorua conference two years ago.  Was treat to catch up with him after his talk.

After the last session we went for a visit around the IRTA and saw the new trees that were growing ready to fulfil this year’s orders.  The first tray was of acorns that had been placed in vermiculite in preparation for their growth.  They had deep trays so the tap roots would grow strong and straight, any acorns that don’t have straight tap roots were removed. 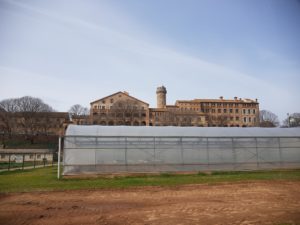 Wandering around the IRTA grounds we were taken through various areas where studies were being undertaken in regards to truffles and which trees they can grow on.  We learned that they are presently trialing pine nuts with truffle inoculation prior to the grafting of a scion from a mature tree.

Was an interesting walk around in the grounds with a beautiful backdrop of the IRTA building.

Was a lovely day of 15 degrees, however, up in the hills where we were going in the afternoon there had a been a heavy snowfall and it was unsure if we would be able to continue to our next destination.  However, after lunch we all boarded the bus again and we were driven to Tàrrega to visit the largest distributor of mushrooms and truffles, Laumont.  It was amazing as you walked into the factory the overwhelming smell of truffles that enveloped you, and yet they only had a small amount of truffle within their building as production had dropped off…it was incredible. 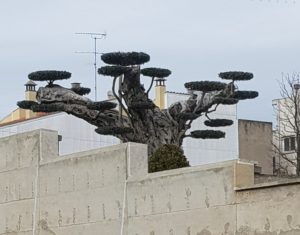 Outside of Laumont was one of the strange trees that we had seen throughout the Spanish travel.  The trees looked like sticks with plates on the end of its branches.  This is a natural occurrence, no constant trimming required to keep them in this shape, they were fascinating.

We then continued our trip for a couple of hours to Terrell which was 300 kms away and at an elevation of 1000 metres.  Our hotel for the night was Hotel La Trufa Negra.  The village was amazing and has a castle which we would visit the next day.  However, this evening the dinner was all ready for us when we arrived. 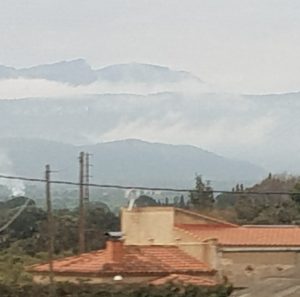 It was another delicious meal which was served at 9 pm… a little late for most of us, but pretty standard for the Spanish.   The day ended with drinks with Anne, Karen, Jim and Peter, all from the States. The Spanish don’t measure drinks, they just pour until you say stop.  The gin was therefore huge, and even with two bottles of tonic it was still very strong and took me all evening to drink it, but in such awesome company, the time flew by so quickly and was extremely enjoyable.

Today was incredible.  Our bus took us to a very large truffle orchard where 60 hectares has been planted with ilex oaks.  Emilio has 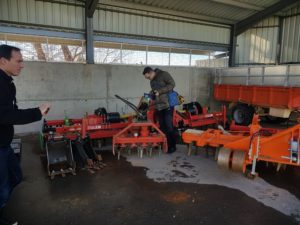 up to 6 truffle hunters and their dogs at his property throughout the season.  Outside of the season they assist with the general health and well being of the truffiere, such as water pipes, trimming trees, and so many other necessary jobs.  We saw the big boys toys that they use to create their Spanish Wells, or spraying of truffle liquor whilst trimming the roots. 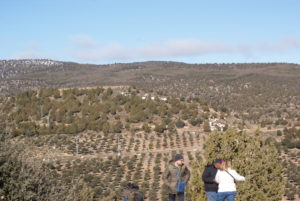 We walked the hill where we were able to gain a great overview of the whole truffiere.  Too big to fit into one shot, so only a small portion displayed here.

Hard to believe that we were in 15 degrees C and the previous week it had been -10 degrees C!

Not having seen snow for quite a long time, I became a kid again jumping into the snow with both feet, although I forgot to make a snow angel or face sculpture.  I saw enough snow to last me a few more decades, so all good.

At the top of the hill was one of the areas that were were going to watch our Spanish truffle hunter and his fabulous dog hunt for some truffles.  His dog was a Griffon x German Pointer, and the first thing I noticed was the lack of tail.  The tail wasn’t docked but 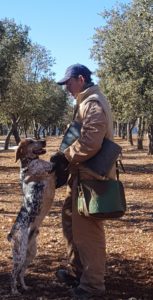 was a natural occurrence from the Griffon side.  It was a stunning dog that really enjoyed its work.  He works off leash, however, with the land and the amount of trees to check, it certainly makes sense for it to work this way.

The dog walked along several rows weaving in and out indicating when he located a truffle.  Sometimes it was a single truffle showing it came from the initial inoculation, whilst there were some clusters that were located which were Spanish wells that had been made two years prior. 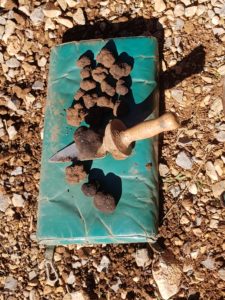 When only a small amount of truffles were located, the comment was made “you should have been here yesterday, 10Kg in one hour”! 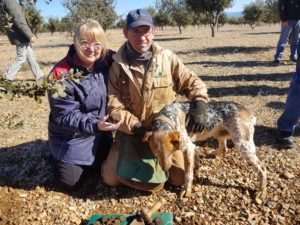